Advertisement
Canada is country that has a large domestic and foreign tourism industry. It becomes the second largest country in the world. Incredible geographical variety of Canada is a significant tourist attractor. Much of the country’s tourism is centered around Canada’s four largest metropolitan areas, Toronto, Montreal, Vancouver, and Ottawa. It is famous by their culture, diversity, as well as the many national parks and historic sites.

British Columbia (BC) is the province that have most mountain in Canada. It has some of the most spectacular mountain scenery in the world. Alpine skiing is a major draw for the province. The BC province has about 33 large ski resorts spread out from Vancouver Island to the Alberta border. Alberta is a province in western prairies of Canada, next to the Rocky Mountains. Its two major cities are Calgary, and Edmonton as the provincial capital. Edmonton is famous  for West Edmonton Mall. It is the largest mall in North America and formerly the largest in the world. Another world-class attraction is the Royal Tyrrell Museum of Palaeontology in Drumheller, housing the largest collection of dinosaur fossils under one roof in the world. Saskatchewan gives two major cities, Regina and Saskatoon. Regina is home of significant attractions in Canada, the Royal Canadian Mounted Police (RCMP) Academy at Depot Division where visitors can view the Sergeant Major’s Parade held weekdays and the seasonal Sunset Retreat Ceremonies. Regina is the RCMP Heritage Centre’s home which opened in May 2007. Saskatoon is become thee largest branch of the Western Development Museum, which houses of the Canadian prairies important artifacts and recreations of the early settlement.

Manitoba was home to many lakes and rivers with over 14.5% of the land area covered by lakes. It is the 5th province to enter confederation in 1870 This offers you many opportunities for outdoor recreation, hunting, fishing, boating, and some of the finest beaches in North America. Manitoba is a four season travel destination offering cross-country and downhill skiing opportunities, as well as many miles of groomed ski-doo trails. Ontario is the best known as the  most populous and second largest province in Canada. Southern Ontario is home of Nation’s capital, Ottawa and Canada’s largest city Toronto. The province is the provincial capital and one of the most multicultural cities in the world. The forests and many lakes of Central Ontario and Northern Ontario also provide popular hiking and camping destinations. Quebec is a majority francophone province. It is a major tourist option. Quebec City is a taste of old France in the new world and a UNESCO World Heritage site. Montreal, the second largest francophone city in the world, has several tourist attractions. New Brunswick is known for its sandy beaches especially along the Northumberland Strait which in summer has the warmest water north of Virginia. 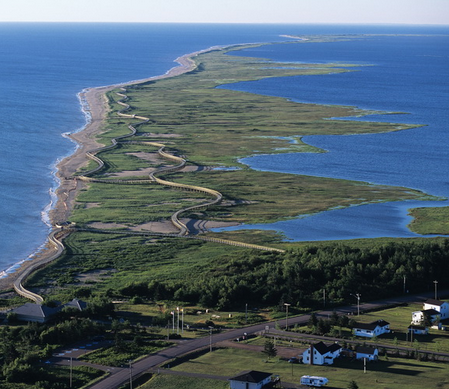 Prince Edward Island (PEI) is the Lucy Maude Montgomery’s character, Anne of Green Gables, and a recreation of her literary home serves as a museum to the character’s birthplace. PEI is also famous around the world for its potato farms and rich red mud beaches. Newfoundland and Labrador offers and attracts many tourists because of its icebergs and fjords, which is settled by Leif Ericsson, an Icelandic sailor, in 1000 A.D. The memory  remains of this settlement can still be found in L’Anse aux Meadows, northern Newfoundland. Nova Scotia is known for its lovely scenery; most renowned is the Cape Breton Highlands. The provincial capital, has several major attractions, such as the Pier 21 museum, Citadel Hill, and the Public Gardens. Yukon Territory with its history of the Klondike Gold Rush, First Nations culture and spectacular wilderness. The Yukon Territory has an extensive tourism industry, welcoming over 300,000 visitors a year.